A History
by Elizabeth Tate

The “Working Men's Club”, now known as the Village Hall a 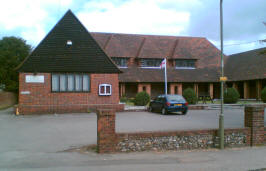 nd Club, was commissioned for the village in 1911 by Robert Fleming, the newly arrived squire, and designed by C. E. Mallows, F.R.I.B.A., a Bedford and London architect. It was built in 1912, using local materials where possible, wood from Scotland and with labour from the Fleming estate. The official opening was in February 1913, at a dinner given by Robert Fleming for everyone in the village. It provided the venue for a wide range of village activities, including quiz shows, musical evenings, plays, dances, gymnastics, rifle shooting, leisure classes, and a cinematograph (“kinema”) which allegedly provided the first example in England of film used as a teaching aid for the school children, c.1914. There was also, of course, a bar where the men could escape their womenfolk, since the word “men” in its original title meant just that, and it is only in the middle of the 20th century that the rules were changed to allow women in the bar other than on Christmas Eve.

Pevsner, in his book “The Buildings of England: Oxfordshire”, describes the building as “a design of some distinction” and as “one of the best Arts and Crafts designs in the county”, although internal changes have much altered its interior, especially the main hall.

The origins of the building lie in a disagreement between Robert Fleming and the villagers. Fleming in 1903 had bought the Nettlebed Estate which included 2,000 acres of land, the pottery kilns, the clayworks and many of the village cottages. In 1904, he had demolished an existing house to build his new home, “Joyce Grove”, a 44-bedroomed mansion. He wished to consolidate the land around the entrance to this house and to create an entrance with a gatehouse. Since this land was Common Land and the site of the village cricket pitch, he was forced to go to Parliament to obtain an Act for change of use, and to offer land in exchange. “The Nettlebed and District Commons (Preservation) Act 1906” was the result, but the replacement cricket pitch, with three acres of land drained to form a recreation ground, failed to appease the villagers, who resented this acquisition of their cricket pitch. To lessen the acrimony, so the story goes, Fleming offered the residents a choice between a village hall and a water supply. The Village Hall was the result of that choice.

The original cost was £ 4,500.00, which compares favourably with similar buildings constructed at the time. This low cost reinforces the architect’s claim to use “the best available local talent” to produce a hall “built by Nettlebed men”. Many of the materials used came from the Fleming estates. These included sand-faced Nettlebed bricks, and handmade local clay roofing tiles from the Fleming kilns. The woods used, which include oak and fir, are said to have come from estates in Scotland. The wrought ironwork was made by the local blacksmith. The building illustrates all the crafts that would have been available readily in the village at that time.

The initial impression of the onlooker is of an attractive brick building, dominated by massive sloping roofs, in mellow colours, and very much part of the existing architecture in the village. It consists of three sides around a courtyard, with the east and west projecting wings containing two smaller halls, equal in size, with a lower roofline. The west wing originally provided a skittle alley, and parallel to the large hall, running the length of the building at the rear, was a rifle range, lighted by a series of skylights.

Internally, the large hall was originally double-storied with an open timbered soaring roof and great arched rafters. This created the effect of a great mediaeval hall or gothic church, with a row of windows at a high level, providing natural light. It featured a stage at one end with changing rooms behind and a 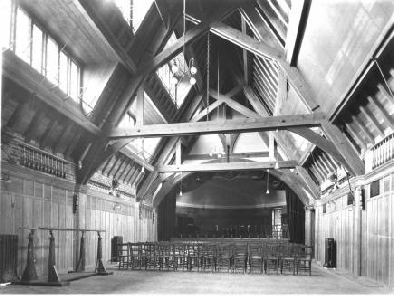 gallery at the other end, which is now closed for safety reasons. A secondary lower ceiling has been installed for practical purposes and the timbered vaulted ceiling can no longer be seen (picture below).

There have been many internal changes made to the building over its 93 year history, and it has been adapted to meet the modern functions of a village hall. It is still, however, a remarkable building, built by Nettlebed craftsmen, of largely local materials, and enjoyed by succeeding generations of Nettlebed residents. 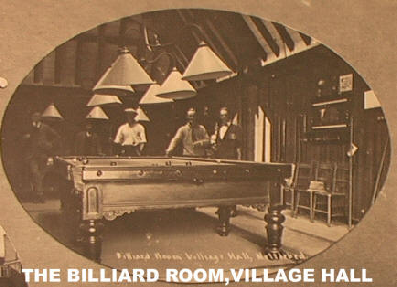